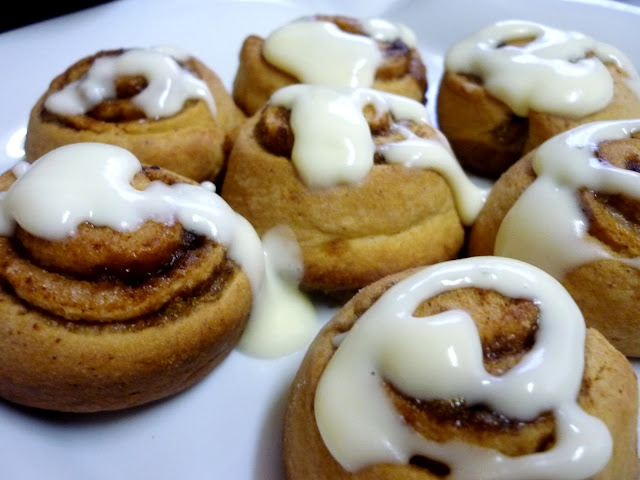 **Click on the pictures for a larger image**
These irresistible rolls are a famous Swedish breakfast item.
The aroma of Cinnamon being baked is to die for :)  It is simply so very extra ordinarily heavenly that one can’t move from the point and that is, from in front of the oven :D
Here in Germany they are known as the “Zimt Schnecken” (translated: Cinnamon snails), they are in different variations with raisins, Walnuts and hazel nuts. I did not add any to these as I wanted them simple, they smell a lot like the famous “Hamburger Franzbrötchen” which I love above all, only that these are in a bun form

I wanted to make them since quite a while but then a Friend asked for them and I thought this is the time to get my hands on it. Sana Hasan dearie  I hope you will try and enjoy them soon :D


They are made in a big tray or a baking sheet but I wanted to make them differently so I had the idea of placing them in the Muffin form, so they come out neat and tidy and easy to pick and eat.
I must say it was a very good idea :) You will see them baking so perfectly, they were so beautiful in size and shape and taste!

I made the dough and let it rest for 40 minutes and then started to work with it
The dough is ultra soft and easy to handle and form. Just one thing that these are REAL Calories Bomb as I really used nearly 250 gram butter in the whole process, but so what, eat drink  and be happy :D
I used Honey to make it real sticky and I must say Super Duper and extreme tasty!!
I have adopted the recipe from a Ladies magazine named “Tina” but as always I made some changes according to what I thought would go good, like adding honey* in it or using a muffin tray instead a baking sheet tray, adding brown sugar* in the dough , and i used dry yeast* instead of fresh because I didn’t have that at home .

The good thing is that the dry yeast I buy is organic and they always write on the back of the pack how much of it is equal to how much fresh yeast and I find this so super and easy. If anyone making this resides in Germany then you can buy the “Alnatura Backhefe” it makes the dough so light and fine!
This is what I did:

So for the dough:

So now you can follow these pictures step by step,
*knead the dough slightly on a good floured base, roll out around a ½ cm thick
*First of all spread the soft butter till all corners evenly.
*Sprinkle the white sugar first, then brown sugar, cinnamon
*Top with zigzag honey
*Sprinkle nuts if you like to
Now start rolling with gentle hands
Cut around 1 ½ inch thick rounds and press the edges softly and place in the muffin tray
Let it stay another 10 minutes and then bake in a preheated oven on 170°C for 25 minutes.
Keep checking do not over bake, I inserted a shashlik stick to check it off and on
My Cinnabons are a bit browner as usually because I used the brown sugar in the dough , you can omit if you want light but brown sugar has its own taste : )
Once ready, take them out and place on a plate, as when the honey melts and gets cold they may stick to the bottom but wow indescribable the taste of melted honey and sugar Ummmmmm : )

Make a cream and drizzle it as they are still warm, I made my frosting with cream like I make for my Carrot cake as that tastes toooooooo good .
150 gram Philadelphia or any brand
2-3 tbs soft butter
½ cup castor sugar
½ tsp Vanila essence
Mix well and drop ….drop…
Viola the ultra delish  Cinni Minnies are ready to gobble : ) 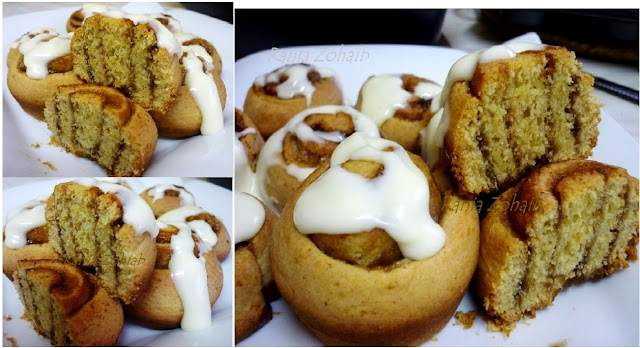