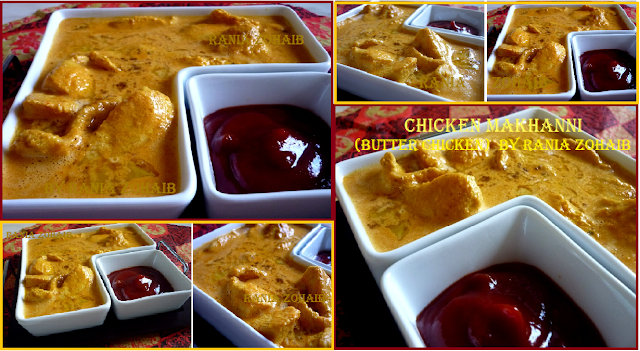 I lately visited the Indian Restaurant MAHAL here and they severd this dish with home made Red chilli chutney.Nice combo coz the chicken is mild in itself.There are many many ways to make butter chicken and every one does its own variations in it too , but basically all use the same ingredients more or less :) We actually don’t use too many spice as the real taste is of the butter n cream in it.I asked the chef if he wud just give me hints how he made his, so here’s round about what he did, actually just 1-2 main difference : )


2-3 drop of red food color mixed in 1tbs of milk
80gram butter (your choice salted or not, I used salted)Made around 3 ½ tbs.


Now fry the onion in the same butter till light punk, don’t fry them brown coz the color of the gravy will also turn brown later

Next add the tomatoes to fry in it and keep mashing them(chef’s tip)
(usually many make a purée of the tomatoes and then add but, here I added them as is to fry first and then blend them)
Fry fast so the color of the tomatoes does not fade yet they become soft.
Pour the cream and yoghurt slowly while it is frying and keep mixing


Sprinkle all the dry spices and mix all well

Not take this creamy gravy out and let it cool down
Blend all this at least 3 times into a really fine creamy and silky mixture
Now return this all into the vessel , add the fried chick stripes to it so it cooks with it
Drop the butter in different places so it melts slowly and mix all gently


You will see it getting thick so don’t leave it unattended
Now mix in the food color to give it a fresh orange color coz the gravy turns a bit reddish with so many tomatoes :-)


Just drop in a tsp of butter as you dish out to serve, gives a rich look : -) 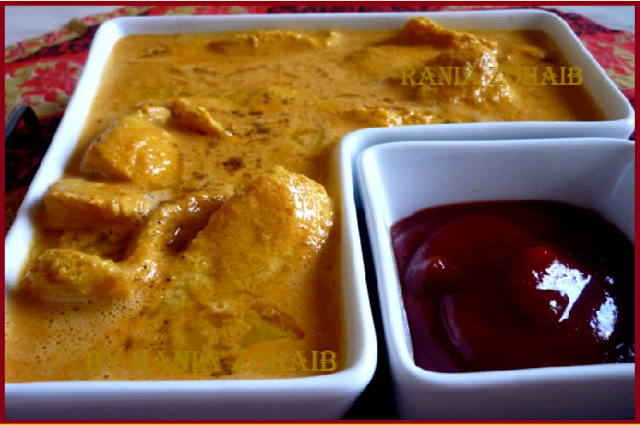 I found the taste much better after frying the tomatoes as it was like good fried gravy and in fact the peanut butter does give it another taste sort of like roasted. Till now I used plain butter but this tip was really good, and coz Butter chicken is a typical Indian dish so these are the secrets tips not all know :)

Have fun making it, I had it with khushka( plain white rice) as with simple Roti you cant really taste the cream and its so divine I tell you :)