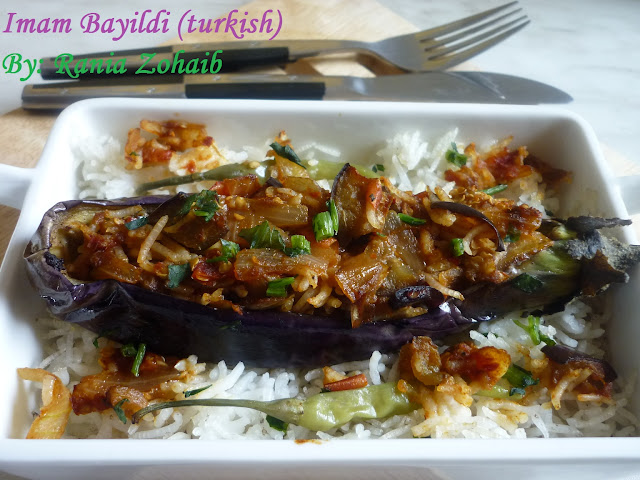 There is a very interesting story behind this dish, there are so many versions, the name means " the Imam fainted" I asked my Turkish friend if there was any reality in the different stories and she said yes it is but which :) thats a good question but the most commen heard is this one. I have copied it from the net as is:

The story goes that it was invented by the daughter of an olive oil merchant who married an imam. He thought the dish was so delicious that he fainted on the spot. And that is where the dish gets its name. In Turkish, Imam Bayildi means, the imam fainted.

“But there’s another version of the story. Some people say that when the woman married the imam, her father the olive oil merchant, gave the couple, as a wedding gift, a fortune in the most precious olive oil he had in all his stores. After the wedding festivities — and there are quite a bit, you know, a party before the wedding, a party after the wedding, a party after consummating the wedding, party after party — they settle down into married life. And she invents this stuffed eggplant dish for her husband, who absolutely loves it. So he asks for it every night. And she makes it every night. And then one night shortly thereafter he asks for it but she can’t make it because they’re out of olive oil. And the imam thought of the amazing fortune in olive oil, how delicious it was, how expensive it was, how you have to use so much of it cooking eggplant, how it was all gone, and that was when he fainted dead away

Hope no one faints making and eating it , but it is really delicious no doubt :) Here you go 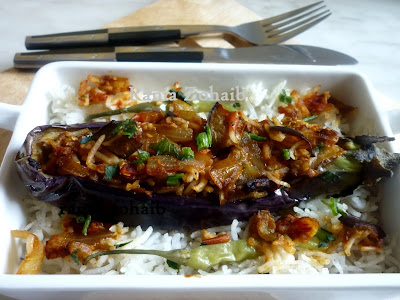 -cut the egg plant in halves, don’t remove the stem
-scrape the veg pod/flesh carefully and cut in dice
-heat 4 tbs olive oil in a pan and place the egg plant shells in it

Enjoy and DON’T faint while eating this yummilicious dish : )
Posted by Rania at 22:25